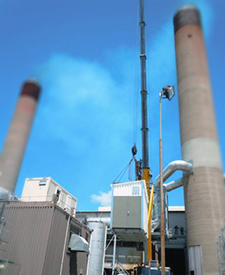 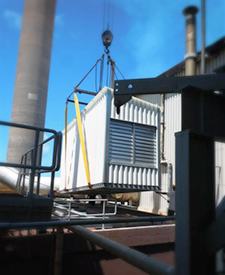 Northwest Electrical Services completes the GO Transit Cogeneration Control System project involving the development and implementation of a control solution to replace and extend the functionality of existing CoGen controls at the GO Transit Streetsville and Oshawa sites located in Ontario Canada. The solution designed and maintained by Northwest Electrical Services LLC used open industry leading products to create a system that allows for around the clock supervision and control without the need to have personnel located at the plant around the clock.

Northwest Electrical Services provides Replacement Generator Air Cooled Heat Exchangers for a large stationary diesel power plant has been undergoing various life extension projects for base load HFO fuel power generation. Working along with Burmeister Wain Scandinavian Contractor A/S of Denmark for mechanical works, the project was completed and in full operation as of Q2 2012 returning both Sulzer engines to original MCR capacity including overload rating of 110% for two hours

Northwest Electrical Services is pleased to announce that we have earned System Integrator Status with Wonderware Corporation. Leveraging the years of experience working in the automation field, and in particular the integration of Wonderware products into many specialty applications, including enterprise portals, we are very excited about continuing and expanding our use and integration of Wonderware products into our portfolio of services.

Northwest Electrical Services is pleased to announce our purchase of an office and fabrication facility in West Chester, PA in addition to our original location in Anchorage, Alaska. The acquisition of the West Chester property broadens our capability to service customers and clients located in the continental US, as well as a convenient location on the East Coast of the USA for our international clients and projects.

Our new office location includes a fabrication facility for many of the systems which Northwest Electrical Services tests and builds. It also serves as the main hub for our information technology systems and service staff dispatch.

Bermuda Electric Light Company (BELCO) is the sole electricity supplier for the island of Bermuda. Primarily a diesel engine power generation facility with a capacity of approximately 180MWe, BELCO selected Northwest Electrical Services in December 2009 to design and build replacement engine cooling systems for three of the generating station Sulzer Z40/48 diesel engines. The project consisted of the design, procurement, installation and commissioning of 15 air cooled radiator units involving structural steel, piping, electrical and controls valued at $2.1M. BELCO required the units to be placed into service prior to their peak demand season which begins in June of 2010, and the units were commissioned and placed into service on schedule with zero downtime of the units they served. Due to the tight timeline, Northwest Electrical Services employed several innovative design techniques and installation methods involving equipment installation, piping systems, MCC selection and control system integration. The combination of these techniques, once installed and commissioned returned the generating units to their nameplate capacity at design peak ambient conditions.

The completed design and installation included:

BELCO Vice President - Plant Management comments, "Northwest Electrical Services has been a valued partner in our facility for years involved in many electrical and automation projects, including the modernization of our plant control systems and our flagship operations centre. Faced with a tight schedule for design and installation, they have once again demonstrated here BELCO that Northwest Electrical Services can meet tight deadlines, minimize downtime and provide the highest quality work in both design and installation."

Bermuda Electric Light Company (BELCO) has selected Northwest Electrical Services to design and build replacement engine cooling systems for three of the generating station Sulzer Z40/48 diesel engines. The project consists of the design, installation and commissioning of 15 air cooled radiator units involving structural steel, piping, electrical and controls. BELCO requires the units to be placed into service prior to their peak demand season which begins in June of 2010. In addition to the cooling project, BELCO has also selected Northwest Electrical Services to install a new RO system for their power station which includes all equipment, installation, commissioning. The new system will extract brackish groundwater and utilize RO and Electronic Deionization to generate process water that meets the power station strict requirements for cooling and boiler water. The system is expected to be fully operational by the 3Q of 2010. In addition, the new system will be fitted with controls and wireless instrumentation to automatically fill various process water tanks located throughout the station.

Northwest Electrical Services teamed with Siemens Energy to successfully commission units one and 2 Basler DECS-200 systems and successfully paralleled the Riverbay Units at COOP city in Bronx, NY. Both units were commissioned and are capable of fully automatic operation in either PF or VAR control. While Northwest Electric did not design the systems, we were called upon to finish the installation which was not fully commissioned. Mark Wray, General Manager and the key staff member that executed the work, commented "It's always a challenge to follow another firm's installation and commissioning before completed, and our preference is to be involved as early as possible. However, we do have considerable operations and maintenance experience, and by following sound principles and techniques we were able successfully install and commission the units to the client's satisfaction."